We are saddened to share that longtime PRSA member Tom Sprague passed away Sept. 1.

Born in Northern California, Tom landed his first paying job at age 14 as an errand boy for his hometown daily newspaper. A gifted athlete, Tom excelled at baseball in high school and for a time was a Minor League player before taking a full-time position at The Stockton Record. His journalism career progressed from writing obituaries to the sports desk to later becoming an investigative reporter. Tom once spent two weeks in a mental hospital on an undercover assignment. He received awards for the articles he wrote about the experience. 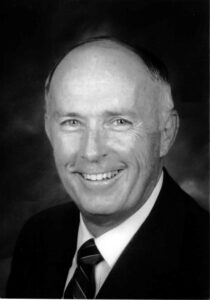 In October, 1957, the Soviet Union launched into Earth orbit Sputnik – the world’s first artificial satellite. Immediately, the United States and the USSR entered an intense “space race” to develop an array of new technologies that would revolutionize weather prediction, global communications, and ultimately lead to human spaceflight. Tom decided he simply had to work in the aerospace industry and landed a PR position with Aerojet General Corporation, a rocket and missile propulsion developer and manufacturer.

As company spokesperson, Tom helped set the standards for public relations in technology-based companies. He also repeatedly found himself at the forefront of history. He was often called upon to explain to reporters and policy makers on Capitol Hill the role the company’s satellite sensor technology played in defusing the 1962 Cuban Missile Crisis as well the workings of Aerojet’s rocket-engine technology that enabled Apollo 11 astronauts to return safely to Earth after walking on the Moon.

Because many of Aerojet’s engineering programs were classified, this meant walking a fine line between sharing too much information or not sharing enough. In all his dealings with the media, Tom insisted on presenting the truth even if at times the news might not be favorable for his company.

In recognition of his outstanding career accomplishments, the PRSA SD/IC chapter inducted Tom into the Otto Bos Hall of Fame. The San Diego Press Club also honored Tom by presenting him with the Andy Mace Award for Contributions in Public Relations.

In the parlance of his baseball days: Tom PR career was an out-of-the-park home run!

An active member of PRSA for more than 50 years, Tom was an Accredited Public Relations (APR) practitioner. In retirement, he gave back to the profession by serving on various PRSA Chapter and San Diego Press Club committees, donating generously to education scholarship funds and inspired many as a mentor to those entering the public relations field.

A final, significant contribution to the local PR community was Tom’s co-founding of a group of senior practitioners dubbed the PR Legends. Created two decades ago, the Legends group is still going strong and has become an invaluable way for its members to regularly network, socialize, and mobilize on behalf of PRSA, as well as to celebrate the accomplishments of this remarkable brain trust.

Tom Sprague, APR, left an enduring PR legacy and will be sorely missed.

BE NOTIFIED ABOUT UPCOMING EVENTS, NEWS, AND OPPORTUNITIES

Don’t be shy. If you have a question, please reach out to us. We also invite you to follow us on social media and subscribe to our newsletter to stay up-to-date on chapter announcements.